FIRST Stronghold is the game for the 2016 FIRST Robotics Competition. The game is played by two alliances of three teams each, and involves breaching the opponents’ defenses, known as outer works, and capturing their tower by first firing “boulders” (small foam balls) at it and then surrounding or scaling the tower using rungs. More Information can be found on Wikipedia . 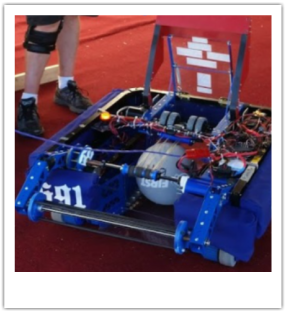 This year, we decided to try something new and made a 6 wheel tank tread hybrid, which was ideal for a challenge with lots of different terrain. This allowed us to keep the overall height of our robot to a minimum while being able to drive over nearly anything. We also had an articulated defense arm at the back that helped to open doors.

Archangel was able to drive over most of the defenses and shoot low goals, but due to the lack of vision tracking high shots were difficult for it.